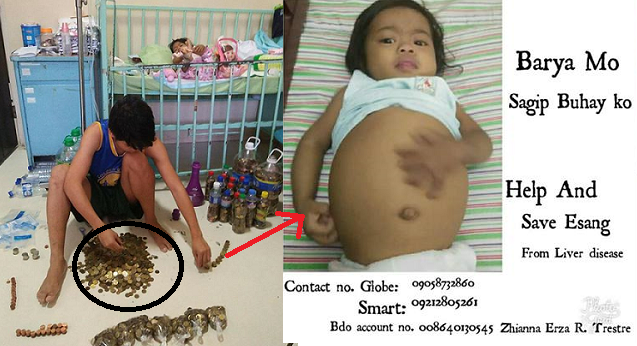 Many people hate it when they get a chump of coins as change from shopping or buying from the store. More often than not, people would ignore 25-centavo, 1-centavo and 5-centavo coins because they cannot purchase anything unless you carry dozens to hundreds of them, which can be a hassle.
But for this father, those ‘worthless’ coins to others can actually save the life of his daughter. Parents are willing to sacrifice and do anything for their children. In a post shared by Jeny Sumalpong on her Facebook account, netizens were touched when a photo of a man named Jeric Aquino Tresfre went viral on Facebook. 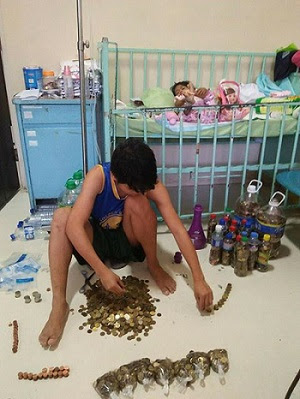 In the photo, the man can be seen sitting on the floor, counting collected coins which were kept in plastic bottles, while his daughter slept soundly in a crib next to him.
His purpose for collecting the cents is that he hopes to collect enough amount of cash in order to pay for the operation to be conducted on her daughter who was identified as Baby Esang.
According to his father, Baby Esang is in need of a liver transplant because she is suffering from Biliary Atresia- also known as extrahepatic ductopenia and progressive obliterative cholangiopathy, is a childhood disease of the liver in which one or more bile ducts are abnormally narrow, blocked or absent. 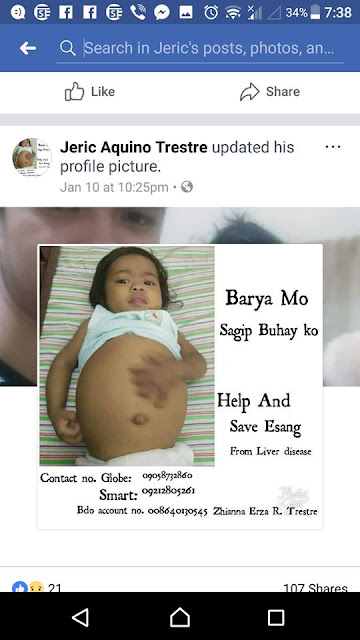 After the photo was shared and posted on Facebook, many kind-hearted netizens reached out and helped the loving father collect enough money for his daughter’s operation.
Baby Esang is now admitted at Philippine Children Medical Center and her parents are still continuing their appeal to everyone who has a big heart and is willing to donate any amount of cash to help them pay for Baby Esang’s surgery and help her live a life free from disease.
source: danified.net