A photo of a studious boy with his toddler brother on his lap has gone viral on Facebook. The heartwarming photo of the studious boy carrying his baby brother while in the classroom was taken by Shyla Blasico, a teacher from J. Blanco Elementary School in South Cotabato. The post caption says that the boy is one of their pupils whose mother died due to ectopicpregnancy last year. 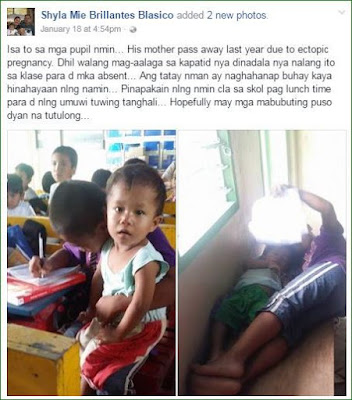 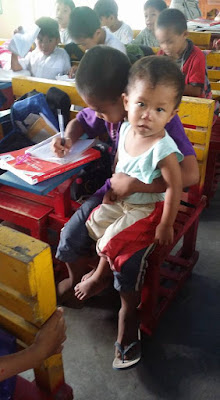 But the teacher’s post was a big help as since posting the photos online, he has been receiving words of encouragement from netizens as well as help from good-hearted people. “Mayroong tumawag, magpapadala ng pera. Mga 8.30 a.m., may nagpunta dito nagbigay ng pera, P500. Yung iba nagtetext,” she said. However, more than the money, the teacher is appealing for food for the family. “Wala daw silang bigas. Gusto namin food, damit at basic school needs,” she said.

She appealed to those who are still willing to help to give her a call first. She added that she and the principal are still discussing the best possible way to help out the children. “Mahirap na, baka pagisipan kami na kukunin ang pera,” she said. 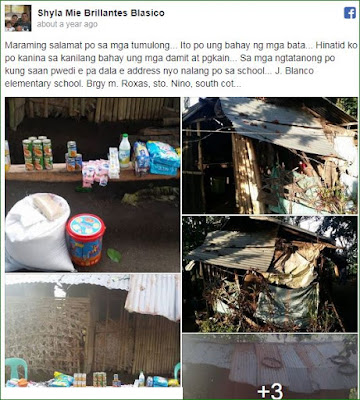 In Shyla’s latest post today, she has captured some of the goods that were given to the boys with the photo of their house.