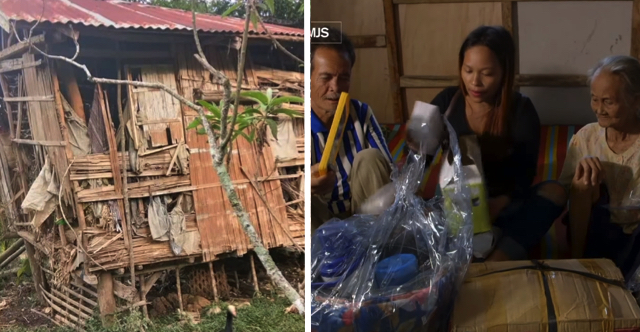 A generous and kind netizen named Linda Mendoza, went viral all over social media after netizens praised and admired her for being generous.
In the latest episode of the GMA’s ‘Kapuso Mo, Jessica Soho’, the elderly couple Lolo Hermie and Lola Tuna Castel from Barangay Carol-an in Kabankalan City, Negros Occidental was given a fresh start after a generous netizen helped them fixed their home.
The elderly couple has been living in a house made of scrap materials for more than 30 years and has proven that love conquers all for better or for worse.
According to Lolo Hermie, it was him who personally built the small house after they decided to leave their first house on the mountain. The couple’s source of income is just mainly from plowing fields and mowing of grass.

Linda Mendoza, the kind netizen temporarily stayed in Bacolod City because of her business, she took photos of the couple’s house and posted on social media on March 27.
Her post went viral all over social media and garnered thousands of likes and shares. After it went viral, the photo was published in Sunstar Bacolod.
Linda Mendoza who felt sorry for the couple used her savings to fix the couple’s home. According to her, she felt sad because the couple didn’t have any children to take care of them.
Linda’s relatives and family helped each other to fix and build the couple’s new house. A lot of donations were given to them and were used to buy the couple’s food, pillows, floor mats, utensils and groceries.
The couple was very grateful who made their new home. A lot of netizens admired and praised Linda Mendoza for her kind gestures for the couple.